How to create and re-deploy high performance teams?

In animal kingdom, ants have perfected teamwork. Living in colonies of millions of ants, each ant has a clearly defined role that benefits the colony. They know exactly what their role is and they do it instinctively. Depending on their individual growth, the teams they form may change over time, and these ants take over new roles, promoting constant growth for the colony[1].

Teams are at the core of any business success… when they work. When they don’t, they can be a source of trouble in the organisation. Oftentimes, building the right team is difficult, but once you do, you will start seeing imminent results. However, what do you do with them once the goal is achieved?

HPTs implement and sustain complex change. They, not only achieve their goal, but also create an environment that is creative and flexible, enabling the realisation of the strategy. When asked about the best team they had worked in, most people respond in a similar fashion. They say that they had fun, people were self-motivated and they felt comfortable working with them. The team becomes a familiar environment and a comfort-zone to foster creativity.

So how do you create these teams that are not simply colleagues, but also become friends that can work effectively together? Whether it is winning a trophy in sport, making a product or solving specific business process problems, all experts agree that effective HPTs need to have focused and timed challenges that can produce sustainable results. You need to have the right mixture of talents, but more importantly, these talents needs to be channelled to a single focused goal.

Each HPT also need a good coach that can guide the team in the right direction. One Hewlett Packard employee explained his team coach as: “He’d make some comments, guiding us in a direction. When the direction was established, he stepped away”[2]. He explained that what made his coach good was that he allowed for individual initiative and accountability which are essential for HPTs. An HPT is not afraid to make decisions and act upon them, which creates an inner desire for success. In displaying creativity, they become so absorbed in their common goal that they forget any differences in status, and focus on their role in achieving the goal. 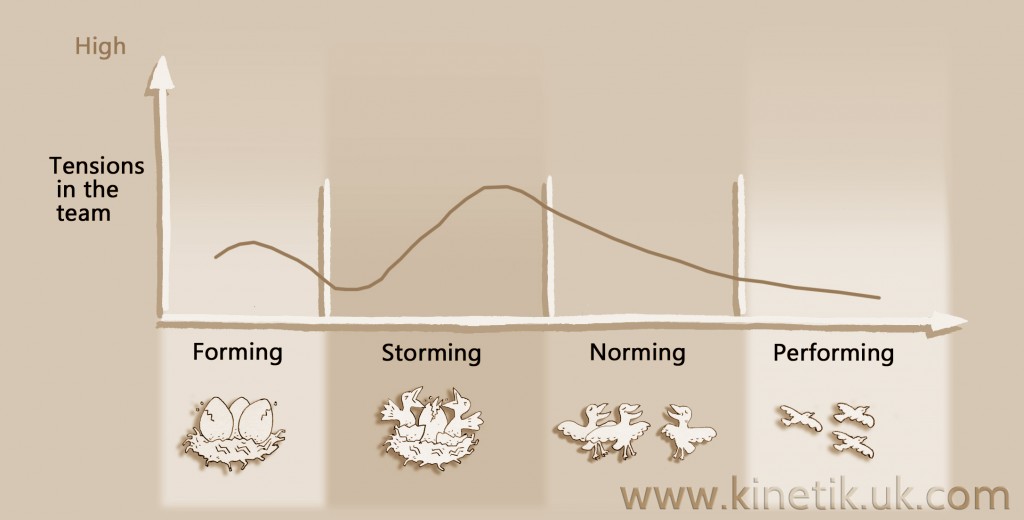 After the HPT is formed, a phase that is called “storming” occurs. Unless this phase happens, the team never performs. Storming is when the team struggles through the process to achieve their goal[3]. It’s almost like the learning part of the process, when the team members learn about each other and figure out ways to work together. The trick for HPTs is to get through this phase quickly, so that the team can start performing.

So your team achieved their goal and became successful, now what? The very behaviours and attitudes that gave individuals the inner motivation to aim for success may diminish once those goals have been reached. Think of your favourite pop music band. Have they lost a member or completely dismantled? Initially they were driven by passion for success, but once they reach there, these passions become challenges with people wanting to change directions.

For business, this can be a crucial step towards furthering their success. Once a team does become successful, a more thorough analysis of the framework needs to be carried out to consider what should be kept and what should be changed. Read our blog on continuous review here: https://www.linkedin.com/pulse/why-continuous-review-creates-sustainable-change-ketan-varia?trk=prof-post

Success can only be sustainable if the teams are successfully refreshed. Sports teams is a good example of how to do so. In the high performance culture of sports, reviewing and dismantling teams is an essential part of the process. Very recently, Eddie Jones has not taken all the same members of a wining English Rugby team, for an Australian tour, arguing that winning has changed some of the players’ attitude and motivation[4]. For him, the motivations of these players have changed at arriving the goal. Seeing this, Jones decided to take action to keep the team performance at the desired level. Continuous review of your teams will help you and your team to think continuously about team organisation, planning and change for success. Sometimes their continuation means that the benefit they initially created is lost: they become counterproductive. Enduring success needs constant rebuilding, whether in sports or in business. In fact, it may give the individual team members a chance to show different skills and improve themselves. However this dismantling process should be done carefully.

The decision to dismantle the team should be discussed openly from the outset, and written as a part of the team formation. The team members should know the goal and that once that goal is achieved the team is to be re-employed towards a new goal. This way, it will not come as a surprise. When the project is achieved, it is time to review the team’s performance, talk about key successes and growth areas for future projects. Individual and team performances can be reviewed and noted down to be implemented in the next team formation.

At the point of success, it is a good idea for the project manager to arrange for those unstated thoughts to be shared via feedback, on a one-to-one basis if necessary. This also means that awareness of subtle issues are raised, so that they don’t subsequently become bigger problems. Upon review, these teams also need the ample chance to mourn. As grim as this sounds, the actual mourning doesn’t have to be sad. One way to do so is to fix a date for the team to separate and on that day celebrate their achievement. This provides closure and a definite end for the team.

In brief, continuous review and re-deploying of your teams is an important part of the creation of high performance teams. It is like a cycle that needs to keep going in order to perform well continuously.

[1] Rogers, Michael. “What Can We Learn about Teamwork and Ants? Video Included.” Teamwork and Leadership Bloggings with Mike Rogers. 2009. Web. 02 June 2016. [http://www.teamworkandleadership.com/2009/10/what-can-we-learn-about-teamwork-and-ants-video-included.html]

Kinetik Solutions, formed in 2007, is a management consultancy firm which specialises in business transformation, process excellence and change management in operational settings. Our way of working is pragmatic but also in the direction of emergent change. Collaboration at all levels within our clients organisation is part of our ethos.